This is the third in my series of articles for the Shropshire Magazine on matters perfume, this time featuring an exploration of some of the traditions of Mothering Sunday and the special place of violets in perfumery.

You can see a pdf scan of the article as it appeared in the magazine, under the title Heaven Scent for Mum or a plain pdf file of the unedited article, which is what appears here. 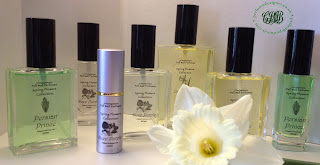 Artemisia - and how to identify natural perfumery ingredients

I used Artemisia absinthium as the key ingredient in my fragrance Devana, but it’s raised a few questions about what it is and whether there are other similar plants about.  I think the genus Artemisia is rather an interesting one, so I thought I’d expand on it a bit here.

First things first the only way to be sure which plant you are talking about is to use the Latin name.  Common names are completely unreliable because the same name can apply to multiple plants depending on who’s using it, what part of the world they are in or what the context is.  Common Wormwood is a case-in-point: it can mean any of several Artemisia species, but most usually it means Artemisia absinthium, which is the plant used in the making of the drink Absinthe and is also the plant whose essential oil I’m using. That still does not narrow it down quite far enough because with many plants, including this one, there can be several cultivars or sub-species or both.  In this case there are several forms in cultivation in gardens - I grew Artemisia absinthium 'Lambrook Silver’ in my garden for many years - in fact that’s how I first came to fall in love with it’s distinctive, dry, herbal scent.

The convention for botanical identification by the way is like this: Artemisia absinthium ‘Lambrook Silver’ - the Genus and species names both in italics, always in that order the first with a capital, the second without followed by any variety name in plain type, all words having capitals - the quotation marks are optional.  I had this stuff drummed into me while studying botany...

So that gives you complete identification for cultivated plants, for sub-species there may be a second italicised name to identify them, as for example Artemisia dracunculus sativa - the Tarragon most often used in cooking, sometimes called French Tarragon and distinct from Artemesia dracunculus inodora often called Russian Tarragon.  There is another plant called Tarragon too: Tagetes lucida - completely different - sometimes called Mexican Tarragon.  Just to confuse matters further the oil extracted from Artemisia dracunculus sativa is usually referred to as Estragon in perfumery, but it’s the same plant.

There are a lot of Artemisia species, with widely differing characters and chemistry - the wiki article I’ve linked to lists quite a few and gives some idea of the range and variability - there are others routinely used in perfumery too:  If the oil is just called Artemisia then it’s usually from Artemisia alba, but can also be from any of several other species.  The oil sold as Armoise comes from Artemisia vulgaris, while the oil sold as Davana (notice the difference in spelling from Devana) comes from Artemisia pallens.  Each of these has it’s own, very different characteristics that are beyond the scope of this post to explore.

Now as if that wasn’t all difficult enough, botanists also argue about nomenclature all the time and sometimes authorities disagree and sometimes the consensus changes and plants are re-named or even completely re-classified.  Unhelpful when you are using older reference books particularly and the net result is that you end up having to know both names.  Slightly off topic, but a good example of that is Vetiveria zizanioides, which has now been re-classified as Chrysopogon zizanioides but is still the vetiver beloved of perfumers everywhere.  There is some debate about whether the two sub-species of tarragon I mentioned are true sub-species, distinct species or just regional variants.

Which brings me to the final consideration - country (and sometimes region) of origin: many plants exhibit different characteristics with different growing conditions and there may also be large genetic variations between widely separated populations and this is certainly the case with Artemisia absinthium - so to know what I’m using you also need to know that my oil is French (which incidentally also means it is a lovely blue-green colour).

Detailed chemistry isn’t always easy to come by, but in the case of Artemisia absinthium it is, because there has been a long history of debate about its medical uses as well as whether or not the drink is hallucinogenic (it was thought to be in the 19th Century when they thought the thujone it contains behaved like THC - the active ingredient in cannabis - now however it is known that it does not).  All this means that loads of people wanted to do research into it, including comparative analyses of plants grown in different places, so there is quite a lot of information out there for those interested.

Finally here is Steffen Arctander’s excellent description of the scent of Artemisia absinthium:


“ . . . intensely herbaceous-green, warm and deep, and a sharp and fresh topnote, reminiscent of cedarleaf oil. The body-note is very warm and dry-woody, long-lasting and highly interesting as a unique perfume note. . . an extremely interesting perfume material which can be utilized in a multitude of new combinations. It blends well with oakmoss; it introduces a true- to-nature herbaceous note in a jasmin, orange- flower or hyacinth; it lends enormous richness to a chypre or a lavender compound . . ."

Valentine’s, Roses and Chocolate - the scent of romance

Here is the second in my series of articles for the Shropshire Magazine, this time looking at the history of Valentine’s Day and it’s association with gifts and incorporating a little foray into gourmand perfumes. 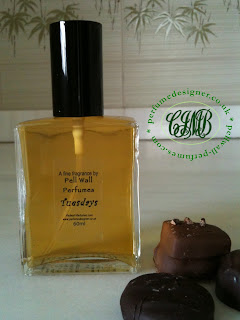